*Editor's Note: Paul Ingram, Executive Director, British American Security Information Council (BASIC), wrote this article about potential threats to the UK's Trident nuclear weapons system. The questions and concerns raised by Ingram also apply to the US OHIO Class (Trident) nuclear weapons system, and we should be paying close attention to the reports and briefings being issued by BASIC. 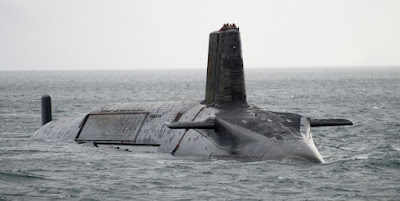 A debate is now raging over BASIC's exposure of the threat emerging technologies present to the future viability of Trident submarines. The Ministry of Defence (MoD) states they do not believe it is a problem, and that even if it were submarines would still be the best, most stealthy platform for nuclear missiles. The confidence implied in the MoD's public line is unjustified, and must surely cover up a deep concern held by strategists for the future viability of its most expensive weapon system. For if submarines are easily detectable, then they are the very last place the UK should choose to put its nuclear deterrent.

In response to BASIC's questions over the future viability of a nuclear deterrent based upon Trident submarines, MoD's latest factsheet (published 26 February) states:


We believe it is unlikely there will be any radical technological breakthrough which might diminish the current advantages of the submarine over potential anti-submarine systems. In any event, we judge that a submarine will remain by far the least vulnerable of all the platform options.

In a Parliamentary Answer on 7 March, Philip Dunne assures the House, 'We are confident that our submarine fleet remains safe and secure,' after explaining that MoD tracks these technologies.

To state that there is no problem is heroic, in the face of the evidence. Echoing what former Defence Secretary Des Browne has said, the principal justification for renewing the Trident system is the future uncertainty of the strategic environment, yet we are being asked to believe there is a strong certainty that our systems will not be transparent and vulnerable throughout its operational life, up to half a century from now.

BASIC's latest briefing last week by David Hambling, illustrates how developing sensors operating with extraordinary computing capabilities, based upon a large number of relatively cheap drones operating in a massive network could take away the stealth of submarines before the Successor class launches in 20 years' time. It is often claimed that it is as difficult to find a submarine in the sea as it is a needle in a haystack. Both are achievable with the right equipment. A needle can be extracted with a very powerful magnet.

The ocean is, of course, massive, but efforts to detect submarines have until now depended upon a small number of sensors based upon large platforms (aircraft, frigates, hunter-killer submarines) patrolling over huge distances. We stand on the advent of a new era where more effective and far smaller sensors can be based on a very large number of automated platforms in or over the sea in constant real-time communication with each other.

Contrary to the image invoked by MoD, we are not talking about some unpredictable, surprise breakthrough. The development of drone technology has accelerated in recent years, so that drones exist today that can travel for many months without refuelling, that can hunt submarines under the surface using a variety of sensors at some range (thousands of metres), and that can communicate with each other. They cannot and will not for the foreseeable future travel at the speed of a nuclear submarine, but that is unnecessary as these drones operate as a pack. The technology needs to mature. The cost needs to come down somewhat. But both these are foreseeable in the next two decades.

Some have responded that in these games of cat and mouse, submarine contractors will simply improve their countermeasures or tactics. But this underestimates the nature of the impact from these developments that effectively bring a hitherto inconceivable level of transparency to the oceans in a relatively short time. Submarines inevitably leave a variety of signatures, and cannot be covered up with the addition of more efficient acoustic tiles, or even some theoretical acoustic cloaking device.

The consequence of this to the manned submarine is far bigger than implied in the second sentence of the MoD factsheet, claiming that even with ocean transparency, submarines would remain the least vulnerable platforms. The submarine's advantage over other platforms is its stealth and the fact that it moves. Take away its stealth and its vulnerabilities become very significant - indeed, the submarine becomes one of the most vulnerable of all options.

Submarines are generally slower than surface ships, and once located and tracked, they are highly vulnerable to attack by missiles capable of hitting targets underwater, or the fast-moving air-launched drone torpedoes under development. An adversary could track the submarine throughout its patrol and hold it at risk, and take it out at the most convenient or critical moment. The UK nuclear posture is based upon a single submarine on patrol, though one can assume that there would be two out in times of crisis. If an adversary were capable of holding those British patrolling submarines at risk, there would be a major incentive to take them out pre-emptively, before the submarine commander would consider launching its nuclear-tipped missiles. In this environment, submarine-based missiles lose their critical stabilising second-strike ability, and contribute to deeply dangerous crisis instability in a similar manner to land-based intercontinental ballistic missiles (ICBMs) that need to be launched on warning in a use-them-or-lose-them posture. Perhaps it's worse...

Attacking ICBMs or aircraft based on the homeland currently involves massive missile or aircraft strikes, involving explicit attacks on the target country that would invite a proportional response on the state perpetrating the attack. An attack on a submarine in international waters would neutralise it and kill a hundred combatants: an act of war, but would it merit a disproportionate nuclear response against cities? In any case the UK would require an ally to launch such a nuclear response on its behalf because its own capability would be lost, unless there were a second submarine on patrol. A second submarine could be held at risk in the same manner as the first.

What about alternatives? Of course they all have their drawbacks. Surface ships are just as vulnerable as submarines. Land-based ballistic missiles have no stealth at all and also require a launch-on-warning posture in crisis situations. Aircraft are also vulnerable to first strikes and need to be rapidly scrambled into the air if there is a warning of in-coming missiles. They can also be shot down en route to their targets. But where these systems have significant advantage over submarines is in the possibility of spreading the assets over several sites, requiring multiple hits. If the systems are dual-capable there is greater chance of investing in sufficient numbers of aircraft and deploying them in a coordinated attack that nuclear deterrence would be achieved at far lower cost. Or it may be time to consider leaving the nuclear game, acknowledging that Britain does need an independent capability, and instead invest in other capabilities that genuinely contribute to European stability.

Until recently opinions on the debate over Trident renewal was largely determined by security, moral, diplomatic or economic concerns. The viability of the systems involved was taken for granted. But this is no longer a responsible response to the emerging evidence that submarines may not only be the most expensive and sophisticated platforms for nuclear delivery systems, they may become the most vulnerable. Reassurances without evidence from institutions or politicians heavily committed to the renewal project hold little credibility in the face of clear and emerging technologies that could not only undermine the advantage of the submarine, but leave us with an expensive and destabilising system. We need to reopen the Trident Alternatives Review and do a better job this time.

Paul Ingram, Executive Director of the British American Security Information Council has been with BASIC since 2002 and been executive director since 2007. Paul has authored a number of BASIC's reports and briefings covering a variety of nuclear and non-nuclear issues.