Buying Submarines in an Age of Austerity

The Navy's plan to increase the size of its fleet is on a collision course with budget austerity. But, fortunately, there's a nuclear option. 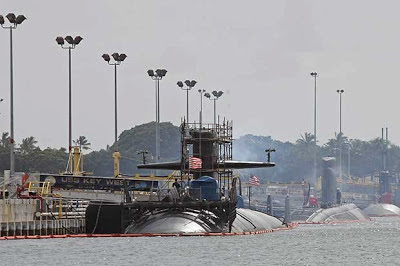 Why is the Navy's plan "unaffordable"? One of the culprits is the Navy's new nuclear ballistic missile submarines, known as the SSBN[X]. The Navy is planning to procure 12 SSBN[X] at a cost of nearly $6 billion each. These extraordinarily high costs "crowd out spending for other necessary ships," according to Senate Armed Services Seapower Subcommittee Chairman Jack Reed, D-R.I., who represents the state where the current Ohio class nuclear missile submarines were manufactured.

Echoing Reed's concerns, Randy Forbes, R-Va., chairman of the House's Seapower Subcommittee, said during the markup that buying these 12 SSBN[X] at such a prohibitive price "will serve to significantly reduce [the size of] our naval forces."

Fortunately, there's a simple solution, according to Hans Kristensen, director of the Nuclear Information Project at the Federation of American Scientists – buy fewer SSBNs. Kristensen's argument for purchasing fewer new nuclear subs is not about costs – though buying fewer ships would, of course, save billions of dollars – it's about how the Navy actually uses its nuclear submarines.

But, if one logically believes the SSBN fleet is 1/3rd the size of what it was at the end of the Cold War, think again. There are only four fewer nuclear launch subs now than there were in the mid-1990's (14 vs. 18), as the Navy's response to Kristensen's report concedes. Thus, each nuclear sub is now doing much less of what it was first designed to do – patrolling as a nuclear deterrent.

All of this leads Kristensen to conclude that "Fewer SSBNs can do the job …The navy could easily cut the SSBN fleet from 14 to 12 boats now and reduce the requirement for the next-generation SSBN from 12 to 10 boats and save billions of dollars in the process."

The savings would give the Navy desperately needed flexibility in a shipbuilding budget that the House Seapower Subcommittee calls "unsustainable." This would allow the Navy to fully fund other ships better suited to the Asia pivot, such as the Virginia class multi-mission submarines – whose cost is half that of an SSBN[X] – which conducts anti-submarine missions, delivers special operations forces in close-to-shore operations and launches Tomahawk missiles.

As Congressman Ed Markey, D-Mass., said, "It is insane to spend hundreds of billions on new nuclear bombs and delivery systems to fight a long-past Cold War while ignoring our 21st century security needs." Cutting the size of our nuclear submarine fleet would both save money yet accomplish the Navy's worldwide mission of nuclear deterrence in an era of military belt-tightening.

Posted by Leonard Eiger at 9:32 PM No comments:

In the face of growing federal budget pressures, the U.S. Navy in May began to more openly question Obama administration plans to purchase a dozen new nuclear-armed submarines.

In its shipbuilding plan for fiscal year 2014, submitted to Congress on May 10, the Navy warns that current plans to build 12 submarines and maintain a surface fleet of 300 ships are not compatible. The Navy states that if it funds the submarines “from within its own resources,” the program will “take away from construction of other ships in the battle force such as attack submarines, destroyers, aircraft carriers and amphibious warfare ships.”

The 12 planned submarines are expected to be the backbone of the U.S. nuclear triad of delivery systems, which also includes land-based missiles and long-range bombers, for the future. The Defense Department wants to replace all three legs of the triad over the next two decades, potentially costing hundreds of billions of dollars at a time when budgets are tight.

Plans for modernization of the triad may be revised under Defense Secretary Chuck Hagel’s Strategic Choices and Modernization Review, due to be released in June, according to Pentagon officials. Senate leaders have asked Hagel to come up with plans for cutting the Defense Department budget by $52 billion for fiscal year 2014. That is the amount by which the Pentagon budget would drop from the fiscal year 2014 request if sequestration—the automatic cuts required by the 2011 Budget Control Act—is not averted.

The Navy is planning to replace its current submarine fleet with a model known as the SSBN(X). As budgets tighten, speculation is growing that the Navy will not be able to afford to do that. In May 9 testimony before the House Armed Services Strategic Forces Subcommittee, Gen. Robert Kehler, the head of U.S. Strategic Command (STRATCOM), said, “I think the ultimate number of submarines that we procure is still an open question.”

The 12 planned submarines, each to be loaded with 16 Trident ballistic missiles and around 80 nuclear warheads, would cost a total of about $90 billion to develop and build. According to the Navy’s shipbuilding plan, construction of the 12 subs would take place from 2021 to 2035, during which time the Navy would need $19.2 billion per year on average for all shipbuilding. That is almost twice the Navy’s fiscal year 2014 request for shipbuilding of $10.9 billion, which does not take sequestration into account. The average construction cost for each SSBN(X) would be about $6.5 billion, accounting for about one-third of the shipbuilding budget starting in 2021, with an additional $11 billion in development costs. The fiscal 2014 request for SSNB(X) development is $1.1 billion.

Hagel has acknowledged the budget pressure. In a May 10 letter to congressional leaders explaining the Navy’s shipbuilding plans, he wrote that “there will be resourcing challenges…largely due to investment requirements associated with the SSBN(X) program.”

Others have been more blunt about the dim prospects that the Navy will be able to find additional resources on the scale it would need. “The Navy’s 30-year shipbuilding plan is a ‘plan’ in name only,” Rep. Randy Forbes (R-Va.) said in a May 10 statement. “At current funding levels, it remains an exercise in wishful thinking.”

Speaking at a May 8 hearing of the Senate Armed Services Seapower Subcommittee, Sen. John McCain (R-Ariz.) called the Navy’s plan “a fantasy.”

The Navy has been trying to convince the administration and Congress that the subs are “national” assets and should be supported by funds outside of the Navy’s budget. Asked at the May 8 hearing if the Navy had made any progress in finding additional resources outside its budget, Sean Stackley, assistant secretary of the Navy for research, development, and acquisition, said, “[T]hose talks have not progressed. I should probably leave it at that.”

If the Navy has to factor sequestration cuts into its budget, as seems likely, funding will get even tighter. At an April 30 event in Washington, Vice Adm. William Burke, deputy chief of naval operations warfare systems, said that buying 12 SSBN(X) subs under sequestration would cause the Navy to “reduce procurement as well as retire existing ships, leaving us with a Navy in the vicinity of 200 ships, at which point we may not be considered a global navy.” The Navy currently plans to maintain a fleet of around 300 ships, including submarines, through 2043, up from about 280 ships today.

The Navy’s ability to change the number of SSBN(X) subs it needs to buy and the time at which it buys them is limited by current U.S. nuclear policy guidance. That guidance determines how many targets must be held at risk by strategic nuclear weapons and thus how many submarines must be “on station” at all times. Submarines that are on station are deployed far off the U.S. coasts and ready to launch their missiles within an hour or so. (See ACT, December 2011.)

Current requirements call for 10 subs to be operational, with another two out of service for repairs at any given time after a decade or more of operation. Such requirements, set by the president, are under review as part of the Nuclear Posture Review implementation study. (See ACT, June 2011.)

Posted by Leonard Eiger at 8:27 PM No comments: