Editor’s Note: Dr. David Hall is a longtime, active member of Ground Zero Center for Nonviolent Action. Ground Zero has resisted the Trident nuclear weapon system for near 40 years. Hall has been a constant voice for abolishing Trident over the years, and continues to speak out against the government’s plans to build a new generation of ballistic missile submarines to replace the current Trident fleet. This guest commentary was first published in Saturday's Everett Herald newspaper.

Three minutes to midnight no time to rebuild Trident missiles

Guest commentary in The Herald of Everett, Washington, January 30, 2016, By David C. Hall 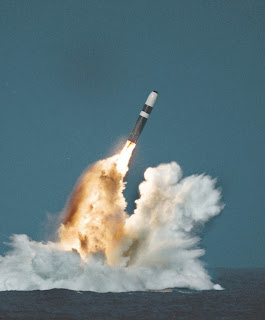 The W-76 warhead is built to explode with 100,000 tons of dynamite equivalent (100 kilotons); the W-88 warhead, 455,000 tons (455 kilotons). The Hiroshima atomic bomb that killed outright about 100,000 human beings exploded with about 12 kilotons. That was an ugly time that we as a human community have fortunately managed to grow beyond. We no longer have Hitler, Hirohito, Stalin or Mao Tse-tung. Germany, Japan, Russia and China are vastly different countries. Germany and Japan are allies. Russia fought al Qaida with us in Afghanistan and is fighting ISIS. China is a major tradingpartner.

U.S. Rep. Rick Larsen, D-Washington, holds a key vote on rebuilding Trident and has yet to speak out. He's hearing “deterrence” from military contractors and military advisers who fail to tally U.S. provocations, but reap contracts returning 1,000 to 1 on their political investments.

Our adversaries see us with ever expanding conventional and nuclear military capabilities. Nuclear weapons help them, not us, level the military playing field. America is fueling a new nuclear arms race. Trident warships are first-strike weapons of mass murder. Horrible idea, immoral jobs. We can (and must) do better. Mr. Larsen?