US ready to host Britain's NUKES if Scotland goes Rogue

As much as I strongly support Scottish independence from the United Kingdom, this recent headline made me question my position (if only for a moment).

GREAT! As if the US doesn't already have far too many nuclear weapons!!!

Senior military officials in the UK told the Sunday Express that "BRITAIN’S independent nuclear deterrent should be moved to the Unites States if Scotland gains its independence." 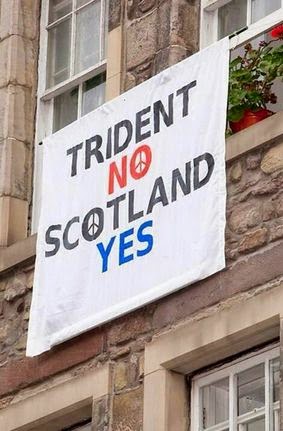 Phew!!! It looks like Britain's four Tridents won't be sailing for King's Bay, Georgia any time soon. The article in the Express does, however, make for some very interesting reading.

First, the notion that Britain has an "independent" nuclear deterrent. Besides the Trident II D-5 ballistic missiles they lease from the United States, there is the issue of intelligence sharing with the UK. As Air Commodore Andrew Lambert put it, "we rely on the US for our missiles and for an awful lot of intelligence." Independent indeed!!!

Should Britain have to move its nuclear weapons operations "south of the border", it would (according to the article) "cost around £3bn and take up to ten years." On the other hand, "'renting space'" in the US would be cheap in comparison.

Republican Congressman Jim Sensenbrenner is strongly supportive of the idea of basing the UK's Trident fleet in the US, and said such a proposal "would have very strong Republican support in Congress." No kidding!!! We certainly need more nuclear weapons, don't we?!?!?!

Of course, the conservative think tanks are all over this one.  "Luke Coffey, a former MoD [Ministry of Defence] aid to Dr Liam Fox and now with Washington DC-based Heritage Foundation said: 'In the chance that the vote is Yes, the first policy paper I will be writing is to recommend that the United States Government does allow the hosting of Britain’s nuclear deterrent.'"

Of course, Coffey couldn't resist slamming the French. “The US would make much more sense [as a base for the British Trident] than, say, France which is less dependable over this kind of issue." Sacre bleu!!!

Coffey did get one thing absolutely right: “There is zero debate here [the US] about nuclear weapons and the idea of having an extra four submarines would not be an issue." Yes, even TWELVE New Tridents are a non-issue!!! One would be hard pressed to find anything resembling a "debate", let alone any discussion of Trident and the issues surrounding it in the United States. 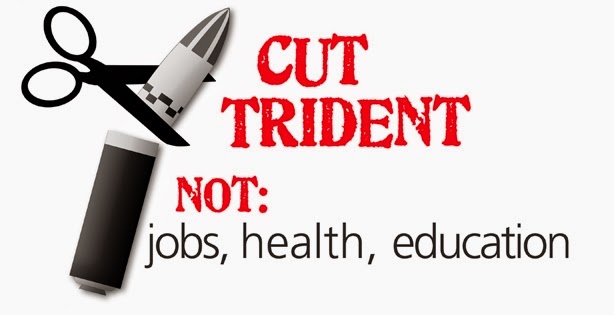 For now, British Trident will continue to sully Scottish soil. Both the British and Americans will continue preparing to build their new ballistic missile submarines. And while the debate continues over basing Trident on Scottish soil, we must do our best to engage people in the US in a serious discussion and debate about why we continue preparing to build the very means of humanity's extinction.

The most important piece here in the US will be putting pressure on Congress to strip funding for New Trident in the 2015 fiscal year funding cycle and beyond. If Rep. Sensenbrenner's comments are an indicator, we have a difficult task ahead of us.

The Center for Budgetary and Strategic Assessments (CSBA) has released its "FY 2015 WEAPONS SYSTEMS HANDBOOK." The report covers a broad range of U.S. weapons systems, including nuclear weapons. The report provides an excellent graphic showing the increasing annual costs of the SSBN(X) program as it moves from research and development into the procurement (construction) phase toward its ultimate $113 billion price tag. The paragraph below is from the CSBA report:


The Navy’s current fleet of 14 Ohio-class ballistic missile submarines is the most survivable leg of the nuclear triad. The Navy has already extended the life of the Ohio-class boats beyond their original design life and plans to begin retiring them in the late 2020s. The Navy has begun a program to design and build a fleet of 12 replacement subs for the Ohio-class, but this program is not yet listed in the SAR. While the Navy has not yet released a formal cost estimate, some cost information can be derived from RDT&E funding included in the budget request and the Navy’s 30-year shipbuilding plan. Using the RDT&E funding identified for the program in the FY 2015 budget request and assuming roughly $5 billion in additional development funding will be needed in FY 2020 and beyond, the total RDT&E cost of the program is likely to total some $12 billion in then-year dollars. Navy plans indicate that procurement of the first sub will begin in FY 2021, followed by the second in FY 2024, and one sub per year from FY 2026 to FY 2035.123 Using a first unit cost of $12 billion and average procurement unit cost of $6.5 billion (in FY 2015 dollars), the total procurement costs would be roughly $101 billion (in then-year dollars).124 The total program cost would be $113 billion in then-year, or $90 billion in FY 2015 dollars, making it second to only the F-35 program in terms of future funding requirements.