Editor's Note: The Congressional Research Service (CRS) has issued an updated version of its report on the OHIO Replacement Program. It is written by the author of the original document and subsequent revisions, so there is excellent continuity here. Ronald O'Rourke is a Specialist in Naval Affairs at CRS. Below is the summary (written by O'Rourke) from the April 8, 2014 document. You can click here to download the document, courtesy of the Federation of American Scientists. 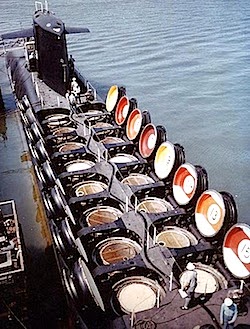 The Navy in May 2013 estimated the procurement cost of the lead ship in the program at $12.0 billion in constant 2013 dollars, including $4.6 billion in detailed design and nonrecurring engineering (DD/NRE) costs for the entire class, and $7.4 billion in construction costs for the ship itself. The Navy in May 2013 estimated the average procurement cost of boats 2 through 12 in the Ohio replacement program at about $5.4 billion each in FY2010 dollars, and is working to reduce that figure to a target of $4.9 billion each in FY2010 dollars. Even with this cost-reduction effort, observers are concerned about the impact the Ohio replacement program will have on the Navy’s ability to procure other types of ships at desired rates in the 2020s and early 2030s.

Potential oversight issues for Congress for the Ohio replacement program include the following:

• the likelihood that the Navy will be able to reduce the average procurement cost of boats 2-12 in the program to the target figure of $4.9 billion each in FY2010 dollars;

• the accuracy of the Navy’s estimate of the procurement cost of each SSBN(X);

• the prospective affordability of the Ohio replacement program and its potential impact on funding available for other Navy shipbuilding programs; and

• the question of which shipyard or shipyards will build SSBN(X)s.

Posted by Leonard Eiger at 3:24 PM